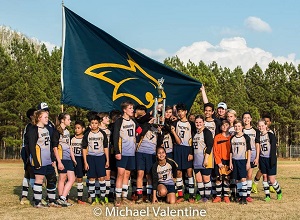 In a soccer match that determined the large school division champions of the West Georgia Middle School Athletic League, the undefeated Bay Springs Middle School Bobcats maintained their season-long dominance with a 3-1 victory over their sibling team, the Villa Rica Middle School Wildcats.  Players from both teams exhibited excellent sportsmanship as their skilled offensive lines battled against strong defenses; the Bobcats allowed only two goals this season.  By the season’s end, spectators from both sides shared their anticipation for what lies ahead as Villa Rica High School combines players from both teams in the years to come.  With many returning players next year, a strong team spirit, and the wonderful support of parents and the community, the remaining Bobcats look forward to their next season together.