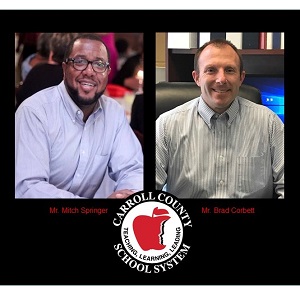 Mr. Springer has served in leadership roles in the Villa Rica Cluster since 2014 and is currently Principal of Villa Rica Elementary School. Under his leadership, Villa Rica Elementary School has seen a 20-point increase in its CCRPI score and currently holds the highest score in the West Georgia area with a score of 94.2 out of 100. Mr. Springer began his career in education at Hilsman Middle School in Athens, Georgia and later joined Carroll County School System as a middle school teacher in his hometown of Bowdon. He holds a bachelor’s and master’s degree in History from the University of Georgia, as well as master’s degrees in Teaching and Educational Specialist from Lagrange College. Mr. Springer is ABD in his doctoral program at Nova Southeastern University, where his dissertation focuses on Early Literacy. Additionally, he is a member of the Carroll County Association of Educators, Fairfield and Villa Rica Kiwanis Clubs and is a board member for Arts for All, Inc., a non-profit art group associated with The Woodruff Arts Center in Atlanta. Throughout his career, Mr. Springer has won numerous awards including Teacher of the Year, Star Teacher, Teacher of Excellence, Administrative Instructional Excellence Award and the Rockstar Principal’s Award.

Mr. Corbett has been with Carroll County School System since 2013 and currently serves as Principal of Ithica Elementary. His leadership has enabled Ithica Elementary to be recognized as a Georgia Department of Education Highest-Performing Rewards School each year he has served as principal. Mr. Corbett began his career with the Fulton County School System in 2002. He earned his bachelor’s degree in Elementary Education from Indiana University and a master’s of Education in Administration and Supervision from the University of West Georgia. In 2012, Mr. Corbett received his Specialist of Education in Educational Leadership from University of West Georgia. In addition to his duties at Ithica Elementary, he also volunteers his time coaching soccer for the recreation department in Villa Rica. During his career, he has been named Teacher of the Year and Rockstar Principal two consecutive years.

Scott Cowart, Superintendent of Carroll County Schools stated, “These two administrators are premier leaders with proven success and tremendous passion for serving families in the Villa Rica Cluster. I am confident that they will continue to enhance the opportunities available to our students in both of these schools.”