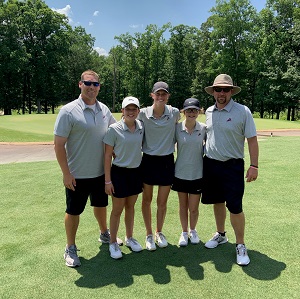 The Central High School Girls’ Golf Team continued their tradition of excellence this season with their third straight Area Championship and fourth consecutive Region Championship, setting a school record for all athletic programs at Central High School. In addition to a premier team performance, Loralie Cowart not only finished in first place overall for the Area and Region, but also was the Runner-up in the State Tournament.

Central’s lady golfers have finished in the Top 10 at the state level for the last four years, and have held the individual Low Medalist area title for three consecutive years.

Head Golf Coach, Don Riggins stated, “I am so proud of our girls for their accomplishments on the course and in the classroom. Their success is attributed to the hard work, passion, and commitment they invest in their game and in preparing for their future. I am very pleased with their performance this year and look forward to continued success for each of them.”