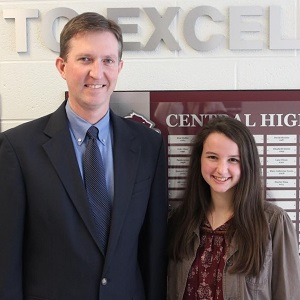 Central High School Senior, Victoria Richardson, has been named a State Semi-Finalist for the U.S. Presidential Scholars Program for her outstanding achievement in Career and Technical Education (CTE). Each year, only 161 students in the United States are selected to be Presidential Scholars, one of the nation’s highest honors for high school students.

Richardson has been a member of The FFA Organization since 2015 and currently serves as President of the Central High School chapter. She also volunteers on the Cans for Cows Service Committee to combat poverty locally and has competed in Land Judging, Livestock Evaluation, Forestry, Creed Speaking and Public Speaking Career Development Events.

In 2016, Richardson was named a Hugh O’Brian Youth Leadership Ambassador and participated in the Governor’s Honors Program for Agricultural Science. She later earned a Georgia Certificate of Merit and is currently a member of the University of West Georgia’s STEM Team and Science Olympiad. Additionally, Richardson serves as a Central High School Junior Marshal and is a member of the Varsity Tennis Team.