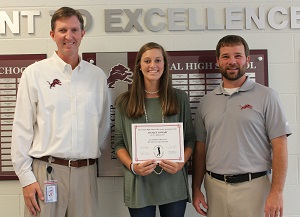 Central High School junior Ainsley Cowart was named to the 2017-2018 All-State Girls Golf Team. Ainsley was nominated for the All-State honor by her coach, Mr. Don Riggins. The Georgia High School Association reviewed nominees
and selected Ainsley for the award. Coach Don Riggins stated, “Ainsley is one of the hardest working athletes I’ve had the pleasure of working with. Her work ethic and determination helped her earn this state honor.” Ainsley is the daughter of Eric and Kim Cowart.