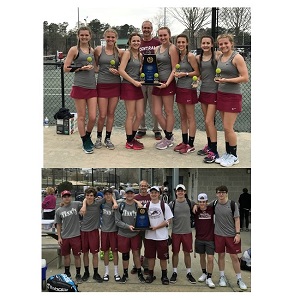 Central High School boys and girls Tennis Teams swept the competition earning championship honors this past weekend. The teams traveled to LaGrange to participate in the Granger Tournament. The girls’ team out played their opponents to win the Division 3 championship while the boys earned the Division 5 championship trophy. The tournament was a two-day event held at the McCluskey Tennis Complex in LaGrange.