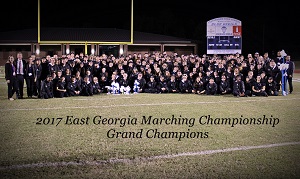 The Central High School Marching Pride Band closed out an incredible season this past weekend at the East Georgia Marching Championship competition in Statesboro, Georgia. The Pride competed against 27 other high schools and, once again, earned all superior ratings and class placement awards in all captions including Drum Major, Color Guard, Percussion and Band. Drum Majors Emily Justice and Hannah Puckett had the highest score of the day for Drum Majors. The event concluded with the Marching Pride being named Overall Grand Champion of the entire competition with a final score of 97.8, their highest score of the season.

The Pride earned the Overall Championship at all three competitions they attended this year, and have now earned 42 Grand Champions in the past 20 years. Congratulations to the Marching Pride on an amazing season!

Mr. Neil Ruby is the Director of Bands for Central High School.