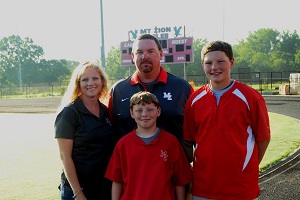 Coach Gordon is a Carroll county native where he attended Central High and then the University of West Georgia where he received his Bachelor’s degree in Secondary Social Studies. Coach Gordon began his coaching career at Heard County High School and from there had stops in South Carolina and South Georgia before returning to Carroll County in 2006 to join the staff at Central High School.  After spending five seasons at Central, he joined Coach Keith Holloway at Mt. Zion in 2012 to become the program's defensive coordinator. The Eagle football program is coming off another successful season with a 9-2 record and advancing to the state playoffs for the third consecutive year.

Coach Gordon stated, “I am excited to continue to be a part of the Mt. Zion Eagle family.  As a member of the Mt. Zion program I have been fortunate to work with an outstanding coach and man in Keith Holloway.  Coach Holloway has done a great job building a foundation for success that we look forward to continuing in the coming years.  The Mt. Zion community is full of great people who are willing to do what it takes to help our student athletes be successful and I look forward to working hand in hand with them moving forward.”

Mt. Zion Principal Tracey Barrow stated, “We are fortunate to have someone like Coach Gordon to take over the leadership of our football program.  Coach Gordon has worked closely with Coach Holloway to build a winning tradition here at Mt. Zion.  We believe Coach Gordon will continue to take steps for us to be a hard working, mentally and physically tough football team that plays the brand of football the Eagle community has come to love over the past several seasons.”

Coach Gordon is married to Jenny Gordon and has two sons, Garrett(13) and Jake (11).